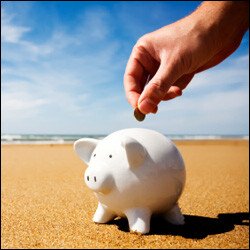 St. Kitts – Nevis tourism gets another boost when it appears as the cover photo in the February edition of Budget Travel magazine, which receives approximately 1.8 million unique page views per month on thir website.

The full-page photo of St. Kitts shows a couple jumping off the pier at Frigate Bay. The title page of the magazine’s cover story, is “The Caribbean Quickie: Your favorite islands are now a nonstop flight away.”

The Table of contents page has another St. Kitts image showing volleyball being played at Cockleshell Beach.

St. Kitts is the first island covered in the story with an entire page dedicated to it accompanied by 3 more photos ““ of a Beach House dish, the southeast peninsula and Tamarind Balls.

A sidebar, “Get There” notes that American Airlines now flies non-stop to St. Kitts daily from Miami.  In the article, the Beach House is credited with putting St. Kitts on the culinary map. Carambola Beach Club, Reggae Beach Bar and OTI are also mentioned for their cuisine.

The Amy Chen article notes that few Caribbean islands are celebrated for their food, but tiny St. Kitts is one of the exceptions. An outpost of stately sugar plantations and white sands, the isle has landed on the culinary map thanks to the newly opened Beach House, a restaurant in a colonial mansion on Turtle Beach.

It announces the opening later this month, of the oceanfront Carambola Beach Club restaurant on South Friar’s Bay, the new Reggae Beach Bar & Grill that serves conch fritters and jumbo coconut shrimp and Isabelle Carr’s JC’s Tamarind Balls, a sweet-and-sour snack made from native tamarind fruit, for more than 20 years.

In June 2005, the publication launched its own website in partnership with Washingtonpost. Newsweek Interactive, which now receives approximately 1.8 million unique page views per month.  Content is also distributed via twice-a-week e-newsletter to opt-in subscribers and via the print publication, which is published 10 times/year and has a circulation of 500,000 monthly (2.128 million combined total circulation.