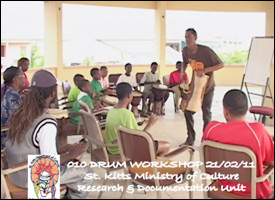 The Department of Culture is encouraging women of all ages to put aside all reservations and consider becoming drummers.

The Female Drumming Workshop is free of cost and runs from Monday, April 18 to Wednesday, 21, 2011, from 5:00 to 6:00 p.m. each evening, at the St. Kitts Department of Culture, Port Zante, located upstairs a commercial building close to the Rum Barrel Bar.

Royd Phipps, Drumming Specialist at the Department of Culture informed the St. Kitts and Nevis Information Service that drumming has traditionally being considered a male profession and his department saw it fit to introduce more women to the possibilities in the field.

The Drumming Specialist explained that in addition to taking it to the professional level and earning an income, drumming on an amateur level can also have health benefits.  He outlined that drumming can be a source of exercise and a great stress reliever.  It was also revealed that the rhythms produced by drumming, is a form of mental exercise.

This is not the first Female Drumming Workshop undertaken by the Department of Culture but Mr. Phipps revealed that while the outcome of the first was a Female Drum Corp, most of the women no longer reside in St. Kitts or became engaged in other pursuits.  He stressed that he would welcome the formation of another Female Drup Corp at the conclusion of the workshop as there are female drummers all over the world.  Drumming Specialist Phipps outlined that it is important that the women of the Federation take advantage of the opportunity to develop such musical skills, particularly since they are being offered free of cost.

Interested females can register by calling the Department of Culture at 467-1415, while queries can be directed to Mr. Phipps at 467-1388.

The Department of Culture is encouraging women of all ages to put aside all reservations and consider becoming drummers.