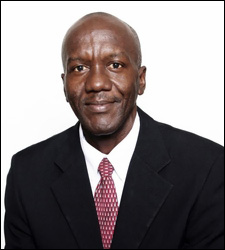 A Kittitian-born career officer in the Royal Virgin Islands and Police Force (RVIPF) has taken up duties as Deputy Registrar of the High Court in Tortola.

According to Platinum News, Chief Justice of the Eastern Caribbean Supreme Court, His Lordship Mr. Justice Hugh Rawlins acting on the advice of the Judicial and Legal Services Commission has approved the appointment of Mr. Mills as Deputy Registrar, High Court.

Mr. Mills who took up his appointment on January 21, 2011 received his Bachelor of Law Degree in 2002 from the University of the West Indies and a Legal Education Certificate from the Eugene Dupuch Law School in Nassau, Bahamas in 2006.

Mr. Mills, who was born in Tabernacle, St. Kitts, joined the Public Service in the British Virgin Islands in 1986 as a Constable in the Royal Virgin Islands Police Force (RVIPF) and has held supervisory positions in the Drugs Squad and the Criminal Intelligence Department.

Additionally, he served as Acting Station Sergeant for the West End District in 2002 and Acting Inspector in the Prosecutions Department from 2006 to 2007. He was confirmed in the rank of Inspector on January 1, 2009. Prior to taking up his new post as Deputy Registrar, Mr. Mills served as the Research/Planning and Corporate Officer for the RVIPF.

As Deputy Registrar Mr. Mills is responsible for processing applications for probates and administration of estates, assisting with court of appeal and High Court sittings, attending to service of foreign process, and attending to matrimonial matters, among other duties.