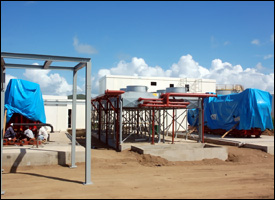 The two 4.0MW Holeby gensets from MAN Diesel arrived on board the Antigua registered BBC Ukraine on Saturday and were mounted earlier this week.

Superintendent at the Needsmust Power Plant Mr. Kevin Bennett said the engineers are presently connecting the high voltage cables from the alternator to the Switch Gear and the cables to the various panel and fuel lines and radiator.

Civil works are continuing at the new site, east of the Needsmust Power Station to accommodate the four gensets, all of which will be in place and fully commissioned by the end of February 2011.

Rooms housing the Motor Control Center, control panel and medium voltage switchgear and office, the electrical annex, radiators for cooling and the fuel treatment building to treat fuel for both HFO (Heavy Fuel Oil) and LFO (Light Fuel Oil) have been built.

The two generators were purchased at a cost of US$10,828,000 and the two expected later this year and to be commissioned by February next year were bought at a cost of US$11,031,000. The total cost for the four gensets is US$22 million.

The largest engine, a 7.6 MW set, was damaged by fire in 2008 and two Caterpillars sets purchased between 1989 and 1995 had to be removed from service due to their long history of failures and problems, poor fuel efficiency and extreme unreliability.