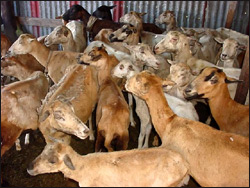 With a significant increase in livestock production in St. Kitts, the Department of Agriculture says the Bayfords Farm is being rehabilitated after years of inactivity.

“There are a total of 21 Holstein cattle which consists of 17 females and 4 males. The fencing of approximately 25 acres has been repaired and pastures cleaned.  Ten acres of land has been identified at Bayfords farm as the designated pig production site for the St. Peter’s community,” said Acting Director if Agriculture, Mr. Ashton Stanley.

The Department of Agriculture also disclosed that Bourkes Breeding Unit has the responsibility for the conservation, multiplication and sale of pure breeding stock of sheep primarily Barbados Black Belly which saw a slight increase in 2007.

It said that the increased production during 2007 was achieved mainly by the willingness of the local supermarkets to purchase more local beef at a competitive price and the ability of the farmers to supply.

The Department said it facilitated the sale of 49,340 kilos of beef to supermarkets and other processors and 8,415 kilos to the school feeding programme.

“Certainly, the production figures are an indication that the market for local beef is being reclaimed,” said Acting Director of Agriculture, Mr. Ashton Stanley.

He said that during the year, a survey of the national herd carried out to determine the capacity to meet the demand for local beef, found 205 cattle owners were registered and 3,324 cattle were recorded.

“It was concluded that based on the current demands for local beef that this herd size is adequate,” said Mr. Stanley, who also disclosed that a water catchment facility was constructed on a cattle farm at Godwin’s Estate with a capacity of 50,000 gallons.

“The goal of the pigs sub-programme is to increase the production of pork under improved systems of feeding and housing to enhance food safety requirements with an aim to penetrate the supermarket and hospitality sectors,” said Stanley.

Local pork continues to show a strong demand in the marketplace as is evident by the sustained production.  Parallel to the amount of pork produced is the number of pigs slaughtered.

The Department also facilitates the sale of pork to supermarkets in an effort to guarantee consumer satisfaction.  Penetration of supermarkets with local pork is a major objective of the pork sub-programme.

During 2007, the Department facilitated the sale of 6,547 kilos of local pork to supermarkets.  This pork was processed from 258 pigs and supplied by 23 farmers.  The sale price of pork to these supermarkets was EC$6.00 per pound with the participating farmers received EC$86,424.00 as gross proceeds.