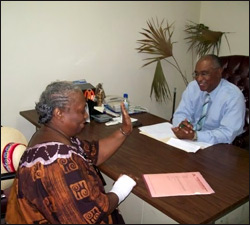 Premier of Nevis Hon. Joseph Parry described his four month old weekly One on One meeting with Nevisians as successful and rewarding. He told the Department of Information in an interview on June 25, 2008, that he had seen hundreds of persons since the initiative commenced on February 13, 2008.

The One on One meetings as they have become known has allowed members of the public to have easier access to the Premier in an informal setting at the Cotton Ginnery Mall, a central location in Charlestown.

“I initiated this programme to meet with Nevisians every Wednesday morning once I am on the island and it has gone very well. The purpose of it was to take the stress off persons who had to make appointments to come and see me. I prefer to have an informal meeting downtown where people just come in and we try to deal with their problems.

“I would say that I see about 15-20 Nevisians every time and so for every month I am seeing about 80 Nevisans. It has gone extremely well and people have expressed satisfaction with the service, if I may call it a service, that has been given and I am very pleased to be able to interact with them in an informal fashion. So I think it is a win, win situation. It has been very, very rewarding,” he said.

Mr. Parry also noted that he had so far met with a wide range of persons to discuss a number of issues from personal to professional; those who offered advice to others who informed him of the happens on the ground while others came to with regard to employment and or training.

He indicated that the initiative was the first of its kind on the island and he had not copied it from anyone.

In response to the planned duration of the programme, Mr. Parry said pointedly that he had no intention to end it.

Notwithstanding, the Premier explained that despite the programme’s success, he had no expectations that the other ministers within the Cabinet to follow suit. Instead he had given them the opportunity to organise as they saw fit to make themselves available to members of the public.

In that regard, Deputy Premier of Nevis Hon. Hensley Daniel has been conducting a similar exercise every Thursday for the constituents of St. Johns.