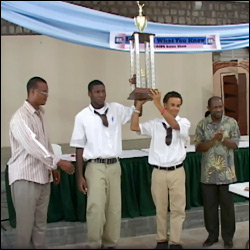 The National HIV/AIDS programme in St. Kitts has new allies who can provide greater inroads to the critical 15 to 24 age group.

The allies were produced after competing in the inaugural Let’s See What You Know ““ HIV/AIDS Game Show. The competition, which was organized by the CARICOM Youth Ambassador Programme of (St. Kitts and Nevis), saw two students from the Washington Archibald, Cayon, Basseterre and Sandy Point High.

Javari Trotman, 15, and Patrick Williams, 14, were presented the championship trophy by Prime Minister Honourable Dr. Denzil Douglas, who also serves as CARICOM’s lead Head responsible for HIV/AIDS. After, the duo spoke to SKNIS.

“It was a very good experience, not only for us but for every one who participated in the preliminary rounds and the finals. I can truly say that we learnt a lot and it was a positive experience,” said Williams. Trotman agreed and noted that it was also fun. He added that the information about contracting HIV, how HIV impacts the body, testing procedures and where to get tested was particularly useful. “We are glad that we took time out to [research the data],” said Trotman.

Williams added that what was most surprising to him was some of the numbers revealing the rate of infection, deaths from HIV-related complications and AIDS and the like. Trotman stressed that more persons would have to make an effort to help protect themselves by avoiding risky behaviour. The young men cautioned their peers to abstain from sex and to ensure that proper protection is used by those that do not.

Williams added that what was most surprising to him was some of the numbers revealing the rate of infection, deaths from HIV-related complications and AIDS and the like. Both young men pledged to be change agents and to share the newly acquired knowledge with peers. Shivani Williams and Fitzroy Mills of the Cayon High School also had similar sentiments.

CARICOM Youth Ambassador Ian Richards stated that he was pleased with the initiative and thanked all involved that contributed to the success of the event. He paid special tribute to the Honourable Prime Minister and Deputy Prime Minister for supporting the participants during the event.