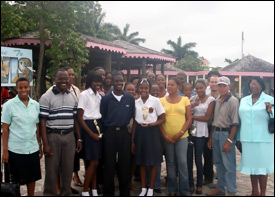 Two students of the Charlestown Secondary School (CSS) were victorious in the recently held Caricom quiz in Antigua.

Miss Yunoka Flemming and Miss Kalea Clarke of Form 4A1 were selected to represent the Federation of St. Kitts and Nevis, after they dominated the national competition earlier this year.

Deputy Premier and Minister of Youth in the Nevis Island Administration (NIA) Hon. Hensley Daniel, on Thursday July 03, congratulated the students on their recent achievement.

“I want to on behalf of the Premier and my other colleagues in government to congratulate the students from the Charlestown Secondary School for winning the Caricom quiz.  Of course we want our students to continue to be very knowledgeable on the region,” Minister Daniel said.

He spoke to the students of the achievements of past Nevisians and elaborated on the importance of the quizzes.

“We have a good foundation in Nevis.  We have a lot of people in Nevis who have performed excellent at the regional and international levels and this is the way in which I think you have followed.  A quiz is a good thing because it tests your knowledge of the Region and it tests how well you are able to remember all of the things about the Region,” he said.

The team was coached by teacher at CSS Mr. Anselm Caines who in his remarks underpinned the importance of being familiar with the Caribbean region.

“So often we speak to the issue of our young people not knowing enough about our Caribbean history and culture and I think that this really provided a good opportunity for them to really learn more about that,” Mr. Caines said.

A contingent from CSS along with Permanent Secretary in the Premier’s Ministry Mr. Joseph Wiltshire, Principal Education Officer Mrs. Jennifer Hodge and Principal of CSS Mr. Edson Elliott, welcomed the students and their coach at the Charlestown Pier.

“We feel special at the Charlestown Secondary School because we were able to produce two students to carry the Federation in that quiz.  We feel that our contribution to the success was a great contribution,” Mr. Elliott said.

The students defeated previous quiz champions Guyana in the zonal round of the competition held in St. Vincent.  In Antigua, they battled against St. Lucia in the final round.  Onlookers described the final round as a “nail biting” experience.  They were also successful in matches against Montserrat and Trinidad and Tobago.