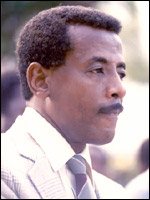 He said Prime Minister Douglas who is in Canada on official business will issue a full statement on Monday.

Sir Clement, who was also served as the last Governor of St. Kitts and Nevis, post independence from 1980 to 1983 was sworn in as Governor General on September 18th 1983 upon independence and served until his retirement in 1996,

Before this, Sir Clement, a barrister was a magistrate in St. Kitts and Nevis and the British Virgin Islands and a judge of the West Indies Associated States Supreme Court.