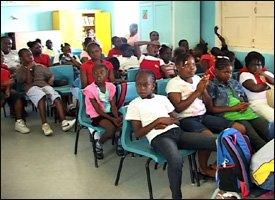 On a day when the island of Nevis was a-buzz with its pre-valentine celebrations, the staff and students of the St. James’ Primary School were sharing another kind of love– the love for Knowledge.

This year, the school celebrated its 6th annual Literacy Day on February 13th.  The event, the brain-child of teacher Shea Wilkin of Brick-Kiln, staged an elocution contest, a debate, and an exhibition of students’ work, among other things.

In a short, but impressive opening ceremony, Principal Vertelly Weeks welcomed all those who had turned up to witness the day’s activities.  She said that the staff and students had put in a great deal of preparation, and was expecting the day to be a tremendous success.  The Principal also seized the opportunity to thank the Hon. Partice Nisbett, whom she said had donated a Public Announcement system to the school in commemeration of its 30th Anniversary.

The elocution contest, which was first on the agenda, was won, hands-down, by the hosts.  Second and third places went to the Bellevue and Lyn Jeffers  Primary Schools respectively.  The debate, which was an in-house competition, was just as keenly contested with the students of grade six making top-class presentations.  The moot:  The mass media is the main contributing factor to the increase in crime in our community, was proposed by Kevern Wilkin and Adoren Manners and opposed by Tijahde Wallace and Cassie Hicks.  In the end, the Proposition emerged as winners, with Cassie Hicks of the Opposition gaining the title of Best Speaker.

In delivering brief remarks, the Education Officer responsible for the school, Mrs. Lornette Queeley-Connor, told the audience that school-wide events that get parents and the community involved are tremendous opportunities to shed light on the great work our students and teachers do every day.  She noted that studies have shown that an increase in Literacy will lead to the improvement of an individual’s life and the development of the society.  In complimenting the parents, staff and students of the school, she went on to say that the day’s activity “should strengthen the foundation of respect for the school and encourage the good work that occurs everyday in the lives of our children”.

On hand to witness the Literacy Day activities were Principal Education Officer, Mrs. Jennifer Hodge, and other Education Officers, parents and members of the wider community, including the school’s social partners, HOPE Nevis.  The event was covered by both VON Radio and Nevis Television (NTV); and was sponsored by Nevis Car Rentals of St. James and Warner’s One Stop of St. Kitts.