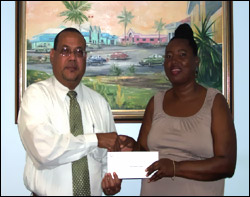 In his brief remarks, Mr. Monish reiterated his company’s commitment to assist various clubs and organizations within the Federation with projects that enhance positive, healthy lifestyles and he cited the game of netball as being one avenue through which physical well being and character building can be developed. “We are, indeed, extremely happy to assist your team in its efforts to participate in the first annual Caribbean Police Netball Tournament as we firmly believe that your involvement will strengthen the relationship among your law enforcement counterparts in the region,” Monish said. “Such an association with regional colleagues can lead to collaboration in other areas of law enforcement which, I’m sure, will redound to the benefit of residents of the respective islands,” Monish concluded.