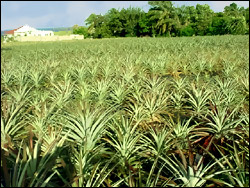 The Labour Government’s expanded land distribution to small farmers is testimony of the administration’s empowerment of the people and commitment to food security.

Following the allocation of some 100 acres of land to farmers in Estridge, Mansion, Phillips’ and Old Road, 44 more farmers have received 80 additional acres of land in the Fahie’s Agricultural Belt, bringing to 224 acres of land made available for farming in what is called “the Bread Basket of St. Kitts.”

“This reflects my government’s commitment to empower the ordinary man and woman in St. Kitts and Nevis in the all important area of agriculture and food security,” said Dr. Douglas at his Press Conference on Tuesday.

Dr. Douglas disclosed that a total of 1,000 acres of land in the Whitegate area ““ from Newtown Ground to Belle Vue ““ have also been earmarked for agriculture.

“Farmers have a crucial role to play in the development of St. Kitts and Nevis because agriculture is important to the continued development of this country,” said the Prime Minister.

He said food security and reducing the nation’s high food import bill are priorities for his government.

“Our farmers are the cornerstone of this country’s future and it is this realization that underlies my government’s expanded allocations of lands to this important sector of our economy,” said Dr. Douglas.