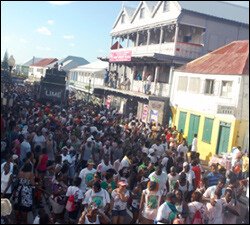 The attempt by the opposition People’s Action Movement (PAM) to use the recent carnival celebrations as a platform for political posturing, is not only an example of poor judgement of the party’s leadership, but indicates a lack of readiness for the major responsibilities of Government.

“This was a very sad and sorry episode” said Minister of State with responsibility for Tourism and Culture, Sen. the Hon. Richard “Ricky” Skerritt, who added that anyone who saw PAM’s “˜Golden Warriors J’Ouvert Troupe’ would have been disappointed by their presence and behavior.

“I believe its failure to attract members must have been an embarrassment for PAM, but it was also another example of the poor judgment of PAM’s leadership,” said Skerritt, who believes that PAM’s J’Ouvert troupe was a serious attempt by PAM to exploit the carnival festivities for their own narrow political gains.

“Carnival is a time for celebration of our national pride and heritage; for St. Kitts and Nevis to show all that is good about our islands and our people. Not for cheap politics. I can’t understand why Lindsay Grant allowed this political troupe to happen. Is he being controlled by others or is he so desperate for votes that he has to resort to these short-sighted tactics?” asked Skerritt.

Senator Skerritt believes that – at what many are already hailing as one of the most successful J’Ouvert celebrations in recent years – such political opportunism does not reflect well on a political party that claims that it is ready for the major responsibilities of Government.

“There were thousands of locals and visitors in attendance. Did you see the crowds? It was such a proud moment for our Federation. And to have PAM try to hijack this event for their own short- term political aims, sends the wrong signal to the international community about the purpose of our Carnival,” Skerritt said.

Sen. Skerritt noted that PAM’s failed “˜Golden Warriors Troupe’, although attracting very few supporters, did include the former PAM Minister of Tourism, Michael Powell, who was unceremoniously removed from his Cabinet post by the PAM leadership in 1992.

Skerritt wondered why Lindsay Grant stayed away, but chose Powell to lead this pre-election J’Ouvert campaign for PAM.

“I am astonished that Michael Powell, at his stage in life, took part in this failed PAM political street exercise. Whatever was Powell’s real motive, I at least expected him to understand the tourism value of our National Carnival, and the potential damage that such blatant Carnival street political campaigning could do to our tourism. If that is what PAM is promising as we move closer to an election: the old-style PAM insular thinking, then every right-minded Kittitian must vote Labour in the coming election. I say this for the sake of the economy, for the sake of tourism jobs and for the sake of our Federation’s future.”