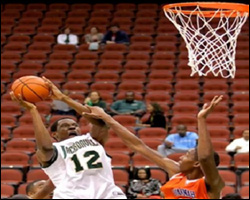 SKABA former Junior star player Shamille “Slanger” Jeffers is making is presence felt as he begins his first season as a 6’7″ starter for the NCAA Division 1 Jacksonville University Dolphins. Jeffers who played with the Basseterre High School Broncos before gaining a scholarship to Williston State in 2008 is touted by Head Coach Cliff Warren as his frontcourt leader based on his athleticism, talent and experience.

“Joining the team this year  is a group of newcomers that features talent, experience and athleticism., said Coach Warren . “Giving JUÃ¢â‚¬â„¢s front court some experience is junior college transfers Shamile Jeffers and Delwan Graham. Jeffers was a star at Williston (N.D.) State College, earning second team all-conference honors after averaging almost 14 points and seven rebounds as a sophomore. Graham comes to JU after starting his collegiate career at LSU before transferring to Chipola Junior College. A four-star recruit coming out of high school, Graham brings an intimidating and physical presence inside.”

The Dolphins began the season last Friday with a loss to the Miami Hurricanes in which Jeffers in his first Division 1 game had 6 points and 6 rebounds in 17 minutes of play. In the teams home-opener against Svannah Jeffers played 10 m inutes and had 6 points and 7 rebounds.

“Shamille played well considering it was his first taste of Division 1 basketball,” said a team source. As indicated by Coach Warren we expect Shamille to be the focal point of our frontcourt. He is an extremely athletic player and we all have high expectation of him.”

Jeffers is currently the only SKABA scholarship player in the NCAA Division 1 and just the 2nd player to play NCAA Division 1 basketball. The first was Jeffrey Bramble who played for Kentucky State.

Jeffers spent the past two years at Williston (N.D.) State College, leading WSC to a 25-7 record last season, including a 17-game winning streak and the region 13 title under coach Hunter Berg…was named second team allconference and second team all-region after averaging 13.6 points and 7.2 rebounds per game ““ hitting 56 percent of his shots from the floor.

Jeffers is a 2nd generation players as his father Arthur “Garfeild” Jeffers is a local basketball legend having Captained the St.Kitts first national basketball team.  Elder Jeffers was also the first individual to Own, Coach, Captain and Play in a SKABA team all at the same time.