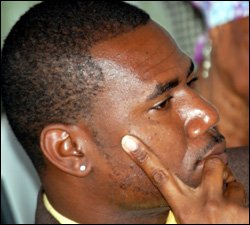 The lone Parliamentary Representative of the People’s Action Movement (PAM) in the National Assembly, the Hon. Shawn Richards, has refused the sit on the Constituency Boundaries Commission (CBC).

This was disclosed in the High Court on Tuesday afternoon by Leader of the Opposition and Parliamentary Representative for Nevis 9, the Hon. Mark Brantley.

Mr. Brantley along with Richards, have been granted a judicial review of the proceedings of the Constituency Boundaries Commission.

On the witness stand, Mr. Brantley admitted that following the resignation of his two appointees, Hon. Vance Amory and Hon. Michael Perkins, he had discussion with the Hon. Shawn Richards of the People’s Action Movement (PAM) on replacing one of the two CBC members.

“I held discussions, but there was no formal indication from the Hon. Shawn Richards to accept my nomination to the Constituency Boundaries Commission,” Mr. Brantley told the Court under cross-examination by Lead Counsel, Mr. Anthony Astaphan S.C.

Mr. Brantley disclosed that since he was rebuffed by Mr. Richards, he has not submitted any names to replace his two party officials who resigned from the CBC.

The case continues Wednesday morning with the Political Leader of the CCM, Hon. Vance Amory taking the stand.