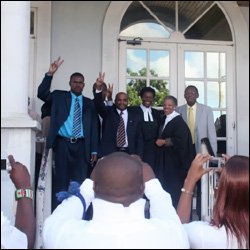 Lead Counsel of the government’s high profile legal team Anthony Astaphan  has given notice that he has advised the Attorney General that the  National Assembly (Amendment ) Act No 16 of 2009 should be revised. This comes just shortly after the learned Senior Counsel Astaphan stated that the challenge against the Act brought by Lindsay Grant, Shawn Richards and the People’s Action Movement legal team could not succeed.

“Senior Counsel Astaphan, the Gov’t and their legal team has accepted defeat in this matter,” said the Hon. Shawn Richards. “Astaphan said in September that we stood a snowball’s chance in hell of winning any challenge to the act and went on to indicate that he had put in papers to strike out our case as according to him the case had no merit. However, now Astapahan has seen papers that we filed in the High Court last Wednesday 20th and Friday 22nd showing why the Act is bad law and badly drafted, Astaphan has now advised the Attorney General to review and revise the same Act that we challenged,” MP Richards continued.

MP Hon.. Shawn K. Richards and PAM Political Leader Lindsay Grant had brought a challenge to the amendment of the National Assemblies Elections (Amendment) Act No. 16 of 2009 on the ground that the Act offended Section 28 of the Constitution. The basis of the challenge to the Act is that it gives  to a Returning Officer the power to determine on Nomination Day whether a candidate for elections was suitably qualified, a jurisdiction which is reserved by the Constitution for the High Court, among other things.

The Act states at section (5A) A candidate for nomination for election shall, before nominated

(a) take an oath to the effect that he or she does not hold dual citizenship , that is to say, that he or she is not, by virtue of his or her own act, under any acknowledgement of allegiance, obedience or adherence to a foreign power or State, and

Statements made by Prime Minister Douglas in Parliament and also at a Press Conference on August 26 had led many people to believe that the Act was targeting PAM leaders. Both Mr. Richards and Mr. Grant had been U.S Citizens until earlier this year when they renounced their citizenship. Dr. Douglas claimed that their renunciation was not complete.

“It would be quite foolish on our part for us as a party to allow this hurriedly and badly drafted act which was done to try and stop myself and my political leader from participating in the elections, to go unchallenged,” said MP Shawn Richards.

The call for a revision of the Act by Senior Counsel Astaphan makes it clear that he accepts that the challenge of the  Claimants Richards and Grant would be successful. The mere fact that the government has to go back to the National Assembly to fix it, means that PAM was right all along.

The National Assembly meets next week Thursday where the revision to the so-called “Shawn and Lindsay” act will be presented for debate.