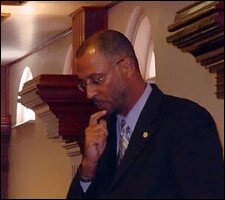 Senator in the National Assembly, the Hon. Richard Skerritt was sworn in as Minister of Tourism and International Transport on Thursday afternoon.

The oaths of allegiance, of office and of secrecy were administered by the Registrar of the High Court, Mrs. Claudette Jenkins, in the Office of the Hon. Attorney General and Minister of Justice and Legal Affairs, the Hon. Patrice Nisbett.

He had resigned as Minister so as to be able to accept the election as Deputy Speaker and protect the procedure of the opening session of the new Parliament during which it was required that both a speaker and deputy speaker be elected.

Skerritt said he looks forward to continuing his public service as a Minister of Government.