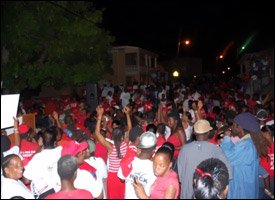 Deputy Prime Minister Hon. Sam Condor says the upcoming general election is about the continued and sustained development of the twin-island federation and of future generations.

“We want you to understand that this election is about the future of this country. Do not allow them to come and tell you anything about Labour is on office too long. How long is too long when you are doing good? What people want is continued and sustained development,” said Minister Condor, who is also the Deputy Political Leader of the ruling St. Kitts-Nevis Labour Party.

Warning that the people of St. Kitts and Nevis can ill-afford to gamble with their future and the future of their children, Minister Condor reiterated: “This is not the time to be giving anybody a chance. You can’t take a chance. When you take a chance, you don’t know how it going turn out. You know what will happen under Labour. You know you could only go upwards, forward and onwards under Labour. Why you want to take a chance with your future? Why do you want to gamble with your future? This isn’t any time to gambling. This is time to be sure and secure with Labour.”

Mr. Condor, who has presided over the progress and strides St. Kitts and Nevis has made in several sectors including social development, education and social security, also said the next election is not about a fourth consecutive term for the Labour Party.