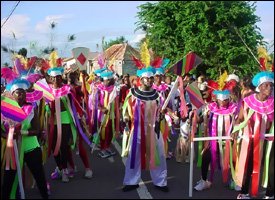 Saddle Fiesta 2009 will be officially opened on Friday evening at the Saddlers Primary School.

Organiser and spokesman Ms. Alicia Collins said the official opening includes a stage appearance by the Dance Hall Queen contestants, which will be followed by a Jam Session featuring DJ Shaggy and Kollision Band.

She said the community festival is being held under the theme: “Working together to fight crime, Saddle Fiesta 2009.”

Other events include a Peace and Unity Talent Explosion and After Dance on Saturday 5th September. A Church Service on Sunday 6th starting at 11:00 A.M at the Saddlers Pentecostal Church and a Netball Festival in the afternoon at 2:00 P.M.

A Community Clean-Up is planned on Monday 7th September; Upfront Talk Against Crime and Violence with cultural icon, Masud Sadiki at 8:00 P.M on Tuesday 8th and a Domino Tournament on Wednesday 9th.

Contestants take to the stage to vie for the title of Dance Hall Queen on Friday 11th September at 8:00 P.M.

Saturday 12th September kicks off at 6:00 A.M. with J’Ouvert with Grand Masters and the Parade of Troupes at 2:00 P.M.