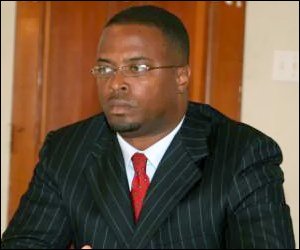 Instead of talking about issues like the skyrocketing murder rate and the economic crisis that is ravaging the Federation, Denzil Douglas is using his taxpayer funded spin doctor to make unfounded allegations against PAM Candidate for Change Eugene Hamilton. In response to an attack article written by the Prime Minister’s spin doctor, Erasmus Williams, Leader of the Opposition and CCM parliamentarian Mark Brantley set the record straight in an email to a popular listserv.

“(British American) did not collapse because of Eugene Hamilton and we all know that,” said Brantley. “It collapsed because of poor business practices by the parent companies emanating from Trinidad. It has not only collapsed in St. Kitts Nevis. It has collapsed throughout the Caribbean from Cayman in the North to Guyana in the South.”

Brantley continued, “The Labour Government was responsible for ensuring proper supervision of insurance providers and protection of the Nevisian and Kittitian investor. It wholly failed in this regard leaving so many people financially destroyed.”

Brantley also indicted the Labour government for failing to provide relief to victims of BA and CLICO.

“Our own Government has, to date, done nothing tangible for Kittitians and Nevisians caught up in this vortex of despair wrought by BA and CLICO,” Brantley continued. “The Trinidad Government has bailed out Trinidad investors leaving the rest of the Caribbean and especially the poorer OECS countries holding the bag.”

He went on to declare that the Federation is faced with a financial crisis.

“St. Kitts and Nevis is faced with a financial crisis of colossal proportion with the regional collapse of BA and CLICO,” Brantley declared. “We have seen nothing like it with our exposure running to hundreds of millions of dollars. Social Security is exposed. Local banks are exposed. Many people have had their life savings wiped out, retirement gone. Life policies, property policies are now worthless. Annuities gone up in smoke. All under the slumbering gaze of regional Governments including the Labour Government of St. Kitts Nevis.”

PAM Parliamentarian Shawn Richards agreed with Brantley’s assessment and laid the blame squarely at the feet of Denzil Douglas and the Labour Government.

Richards said, “It’s the Labour Government that is responsible for the financial crisis in St. Kitts and Nevis. Denzil Douglas and his government are the ones that failed to provide a financial safety net to innocent Kittitians and Nevisians who invested in CLICO and BA and lost thousands. They are the ones who also failed to provide proper regulatory oversight which could’ve avoided much of the crisis we’re faced with today. And, now, it’s the Labour Government who is trying to draw attention away from their failures by making untrue personal attacks against Eugene Hamilton.”

Richards concluded, “Labour’s failures have brought us this financial crisis. It’s time for competent administrators to take the helm and rescue our economy. It’s time for change.”