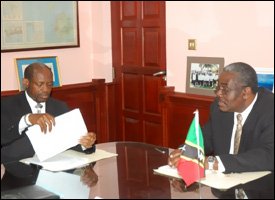 Prime Minister Douglas, the current Chairman of the Regional Security Council of Ministers was updated on administrative as well as operational matters of the RSS and assured him of the commitment of the RSS to assist with the crime fighting initiatives of the security forces.

The role of the RSS in the upcoming Commonwealth Heads of Government Meeting to be convened in Trinidad in November of this year and the successful outcome of the operational exercise in St. Vincent and the Grenadines were also discussed.

While in the Federation Mr. Watson held discussions with the Security Chiefs and members of the High Command of the Police and Defence Forces on the issue of gang related crimes and advised on areas of strengthening their crime fighting strategies.

As a former Commissioner of Police and the coordinator of the security response mechanism in the member states of the RSS, Mr. Watson’s recommendations were informed by his years of experience in the field of law enforcement and the overall security apparatus.