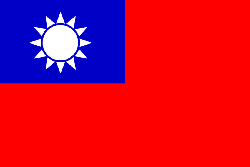 The National Flag of Taiwan

Entrepreneurs in the Federation have an opportunity to network with their Taiwanese counterparts thanks to the staging of a Trade Show at the Royal St. Kitts Hotel over the weekend.

Phillip Browne Business Development Officer of the Ministry of International Trade, Industry and Commerce, who is serving as the focal point for the Government in this event, noted that the Taiwanese Trade Show can be of much benefit to entrepreneurs.

“Approximately 300 products will be exhibited and the entrepreneurs will be at the Royal St. Kitts Hotel to explain their function as well as to answer questions,” Mr. Browne stated.  “This is an opportunity for local businesses to make contact with prospective suppliers in person.”   The Business Development Officer also revealed that three spaces are also allocated for local entrepreneurs, specifically, The Craft House, Sun Island Clothes (the bottling component) and Kajola Kristada Ltd.

Part of the total delegation, which represents approximately 30 Taiwanese companies based in Florida U.S.A., will arrive in the Federation tomorrow, (April 14) to commence setting up at the Royal St. Kitts Hotel.  Taiwanese products including mobile phones, notebooks, digital cameras and camcorders and sports sunglasses will be among items showcased.

The Trade Show is open to the general public from 11:30 a.m. on Friday and attractions include big prize raffles at 3:00 p.m. on the same day and at 12:00 noon on Saturday.  Early visitors also have the opportunity to receive free gifts.