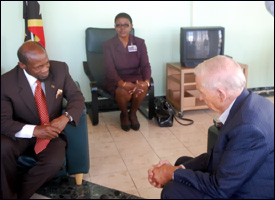 The man who could give the greenlight for a Ritz-Carlton to be constructed here visited St. Kitts’ Southeast Peninsula Thursday.

In welcoming Mr. Bill Marriott shortly after he arrived on his Executive Jet at the Robert L. Bradshaw International Airport Thursday morning, St. Kitts and Nevis’ Prime Minister Hon. Dr. Denzil L. Douglas noted that the great emphasis placed by the Marriott on St. Kitts as a destination.

“We want to make sure that we can do whatever it takes to improve upon it. We rely on you for guidance and support,” said Dr. Douglas.

Prime Minister Douglas, who played a major role in attracting the St. Kitts Marriott Resort and Royal Beach Casino, said his Government was ready to facilitate the construction and opening of a Ritz-Carlton within the multi-million Christophe Harbour Development Project.

“We appreciate your great cooperation. Tourism is very important to you and it is also very important to us. You have great potential here. You have lovely people, beautiful climate,” said Mr. Marriott, whose leadership spans more than 50 years, and he has taken Marriott from a family restaurant business to a global lodging company with more than 3,100 properties in 67 countries and territories.

“That is good. That will help the island a lot, help Nevis a lot,” Mr. Marriott responded when PM Douglas answered in the affirmative.

After extending departing pleasantries, Mr. Marriott, accompanied by his Executive Vice President and other senior officials, went on a tour of the Christophe Harbour Development Project before departing St. Kitts.