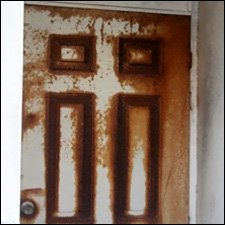 In Tuesday’s Sun, Tesser Archibald-Hazel, a resident at the Gardens Housing Project, blew the whistle on deplorable and unsanitary conditions in her home. After seeing the article, PAM Parliamentarian Shawn Richards toured the complex to see first hand the unsanitary and unhealthy conditions subjected upon the tenant by the Labour Government.

Mr. Richards was shocked by what he saw. The building is termite infested, the windows don’t work and there is no security for the residents. But, perhaps the most disgusting thing about the complex is the urine that leaks into Ms. Archibald-Hazel’s apartment from the broken toilet in the apartment above hers. The urine stains are all over the walls and the leak is so bad that there is actually a container in Ms. Archibald-Hazel’s apartment to catch the leaking urine.

The tenant has written and received multiple letters from the Labour Government over the last several years. Complaints according to her go back as far as July 2004. She wrote to Labour Minister Cedric Liburd and multiple other staff  and board members of NHC along with other ministers within the Labour Government including PM Douglas. It’s been five years since she first reported the problems, and, to date, the Labour Government hasn’t addressed the unsanitary conditions.

“I have a stack of letters to the Labour Government seeking action,” said Ms. Archibald-Hazel. “But, it’s been years and they haven’t fixed it. All I get is promises and excuses but no action. Some of my neighbours have received faster responses and it makes me wonder if it’s politically motivated. The government is supposed to serve all the people, not just their die hard supporters. I have two children living here and they deserve better than to live in these unsanitary conditions.”

Mr. Richards, who toured a few of the apartments this week, was appalled by what he found.

“PAM built this housing complex in the 1980s, but, over the past 15 years, Labour has neglected it to the point of ruin,” said a shocked Shawn Richards. “Minister Cedric Liburd and the Labour Government know about the disgusting and unsanitary conditions at the Gardens Housing Project and they’ve done nothing. This is yet another failure from a Labour Government that has brought us a record national debt and a crime and murder crisis.”

PAM Candidate for Change  Roy Angus Fleming , who is seeking to represent the people of Gardens, also weighed in, “As the next Parliamentary Representative for the area, I can personally assure the residents of Gardens and all the residents in my constituency that I will look after their needs. I look forward to being a tireless advocate for the people in Gardens and across my constituency in the Parliament.”