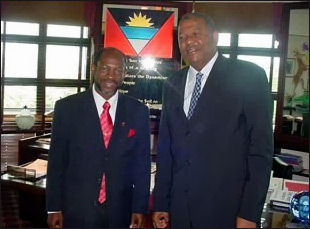 Options for enhancing regional tourism in the context of current international trends, rising energy costs, achieving food security and mitigating rising food prices and climate change are among matters which will be addressed by Caribbean Heads of Government when they meet in Antigua and Barbuda next week.

Prime Minister Douglas and his regional colleagues will also discuss overcoming challenges in building a community for all, the Free Movement of Skilled Community Nationals including the Issue of Contingent Rights; progress towards the establishment of the Single Economy including the launch of the CARICOM Development Fund, the Regional Development Agency and other developments related to services.

Caribbean leaders will also discuss the preparation for negotiation of a CARICOM-Canada Trade and Development Agreement, Prioritisation and Scheduling of other External Trade Negotitaions as well as the Caribbean Regional Negotiating Machinery.

Crime and Security including the implementation of the decisions of the 13th Special Meeting of the Conference held in Trinidad and Tobago and the major decisions coming out of the Sixth Meeting of the Council of Ministers responsible for National Security and Law Enforcement held in St. Kitts earlier this month are also on the agenda.

Heads of Government will also discuss developments related to the University of the West Indies and on Human Resource Development and Health and HIV/AIDS Issues, receive an update on preparations for the Fifth Summit of the Americas to be held in Trinidad and Tobago in April next year and finalise CARICOM’s attendance at the CARICOM-SPAIN Summit in July; the CARICOM-CANDA Summit in Canada; the African Union Disapora Summit and the CARICOM-CUBA Summit.

Relations between Guyana and Venezuela and Belize and Guatemala are also on the agenda.