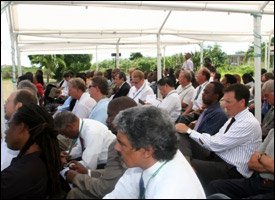 The development of renewable energy on Nevis must continue. Minister responsible for Natural Resources and the Environment of Nevis Hon. Carlisle Powell made that position clear when he addressed participants at the start of the landmark 1st Eastern Caribbean Geothermal Conference at the Mount Nevis Hotel on Tuesday.

“The rising price of oil, all the environmental concerns with CO2 emissions, the instability of major oil producing countries in the world, the need to reduce the cost of electricity and hence the cost of living among our people, means that we absolutely must continue to develop renewable energy and geothermal energy in particular,” he said.

According to Mr. Powell, the use of geothermal energy would not carry a fuel surcharge and therefore the cost of electricity would be significantly lowered.

The tourism sector was another area the Minister noted would benefit from the island’s use of geothermal energy. He cited that the island could be marketed as a green destination and rekindle interest among the islands [Nevis and St. Kitts] as a tourism destination.

Mr. Powell said the use of geothermal energy, on Nevis would help the island to lower its carbon footprint [greenhouse gas emissions which are caused directly or indirectly by an individual, organization event or product].

Nevis began its thrust into geothermal energy recently and Minister Powell explained though the island was blessed with abundant sunshine and friendly people, oil was not one of its natural resources and the island has had to depend on imported oil to produce electricity.

He explained that in 2007 the island’s electricity company spent over EC$22million to purchase diesel to run the power plant and in 2008 that figure rose to EC$33.3 million.

“As a result of that we have started the process of acquiring renewable energy and specifically geothermal and wind energy,” he said.

In January 2007the NIA Granted West Indies Power a licence to commence geothermal explorations and in 2008 the Geothermal Resources and Development Ordinance was passed in the Nevis Island Assembly.

According to Mr. Powell, WIP had indicated that Nevis would begin to utilise geothermal power by mid 2010 and later that year St. Kitts would be able to follow in Nevis’s footsteps.

A 1998 study by the United States Department of Energy revealed that Nevis had the potential to produce 900 megawatts of power. Current statistics indicate that the island utilised only 6.5megawatts of energy and peaked at about 9 megawatts.

“Basic mathematics would suggest that if we only discover and exploit about half of the energy potential on Nevis, that we would still have a substantial amount for export to neighbouring islands,” he said.

The conference which concludes on July 02 was hosted by the NIA in conjunction with the United Nations Economic Commission for Latin America and the Caribbean (UNECLAC), the Organization of American States (OAS) and the Caribbean Renewable Energy Programme (CREP) ““ German Technical Corporatioon (GTZ).