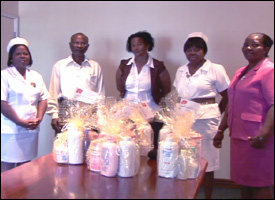 Six newborn babies at the Alexandra Hospital will be the recipients of baby hampers from Rams Group of Companies.

At a handing-over ceremony in the conference room at the Alexandra Hospital, Health and Beauty Brands Manager for Rams Group of Companies Mrs. Shirley Julius announced that her company had established a relationship with the Nevis-based hospital whereby “the first baby to be born in each month from March to December 2011 would receive a hamper.”

“We at Rams Group of Companies are always committed to our customers. We believe in giving back and so we are always reiterating our commitment to our and so I am very pleased to hand over these packages to the administrative staff at the Alexandra Hospital,” Mrs. Julius said.

In accepting the baby hampers, Acting Hospital Administrator Mr. Joseph Claxton expressed his gratitude to the company for its “generous donation” and laid the foundation for a “strong relationship” between the entities.

“We do hope that these would serve as an asset to the maternity unit and we hope that the Rams Group of Companies along with the Alexandra Hospital would continue to foster a good relationship,” he said.

Nurse Manager for the Maternity and Pediatric Units Mrs. Adriene Ward-Stanley also recorded her appreciation to Mrs. Julius and said she was confident that “the patients would be quite excited about receiving the gifts.