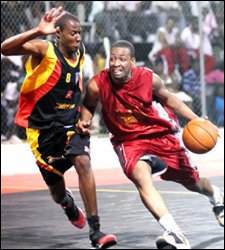 The East Basseterre Basketball league has come out of the success of the Ghetto Roots Basketball Club which won the 2009 SKABA Premeir Division with a clean sweep of the Rams Hitters. The teams victory energized the club, the fans and the community and as a result a call was made to start a Community League for the players and people of East Basseterre, in particular Newtown.

The 4 week long tournmant  is expected to begin on Saturday 20th 2010 and is expected to feature at least 8 teams including 3-4 teams coming from within the Ghetto Roots Organisation featuring players from the Premier, Junior and “A” divisions.

There will be a very attractive cash prize of $1500 for the winner of the tournament  in addition to a plethora of individual and 2nd and 3rd place prizes .

“The cash Prize of $1500 is more than what the SKABA Premeir division Champs have been taking home for the past 20 years ,” said Ghetto Roots Manager Wallis Wilkin. “So i anticipate that teams will certainly be clamouring to take part in the tournmanet to not only earn bragging rights but also cash,” Wilkin continued.

The organizers of the event also stated that games will be played on Saturdays, Sundays, Wednesdays and Thursdays.

Persons, Players and Teams interested in participating are asked to contact Tenille Lapsey on 664-8322 or Wallis Wilkin on 662-5152  for further information.