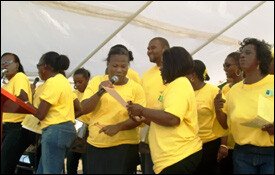 The Premier of Nevis and Minister of Education, the Hon. Joseph Parry commended Teachers in Nevis for their hard work and commitment to the teaching profession. He made the statement in celebration of the World Teachers Day Rally held at the Villa Grounds on Monday, October 5th, 2009.

“Teaching is not just a noble profession but it is the most important profession in the world! If we have no teachers, we have no country because without education, we are nothing,” remarked Premier Parry.

The Premier informed the teachers that the global economy is in recession and there are many challenges financially worldwide.  He said despite this position, residents of Nevis must think positively and not abandon ship.  He also said it is of the utmost importance for teachers to continue to give the best education, regardless of remuneration.

Even though the financial climate is not the best, the Nevis Reformation Party-led Government has sought to work with teachers. Thirty two new teachers who showed tremendous interest in the teaching profession were recently hired.

In an effort to get more young people to attain sixth form education and not move immediately into the work force, the Premier has asked that adjustments be made on the requirements for entry into the Nevis Sixth Form College.

Mr. Parry and his Nevis Island Administration have continued to exhibit keen interest in education in Nevis by seeking to provide computers in all the primary schools, the expansion of the Charlestown Secondary School staff room, an increase in the number of class rooms and school meal plans which will begin next year.

According to the Premier, it is an important mission for his administration to create comfort, by giving teachers and schools the tools for optimum performance.

“Even though finances are not the best in Nevis presently, next year we will look to making the entry level package for new teachers more attractive,” remarked Premier Parry.

The Minister of Education also told the attentive audience that his government is looking to encourage more teachers to go off to study in order to get a stronger and better educated teaching fraternity.

“It is important that teachers are happy and comfortable and the Ministry of Education is looking to have constructive discussions with teachers in order for them to get a benefit package that is sufficient to all teachers,” he added.

Mr. Parry concluded that a value system of hard work is good and necessary. He went on to say that the harder the work, the greater the satisfaction would be!