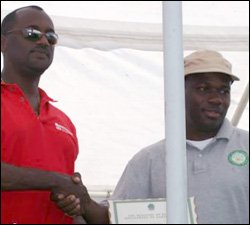 Mr. Marcel Hanley of Pond Hill was named the Top Farmer for 2009 on Thursday, at an opening ceremony to mark the start of the two-day 16th Annual Agriculture Open Day. The event was held at the Villa Grounds in Charlestown.

Mr. Hanley was one of several farmers who were awarded for their contribution to the Agriculture on Nevis.

Top Fisher for that year was Mr. Andrew Claxton while the most fish through the Fisheries Complex went to Mr. Collin Huggins.

A number of staff members were honoured. Ms. Sharon Alfred was awarded for service in Animal Health; Ravendra Hoosain in the Abattoir Division; Donald Morgan and Hemchand Moolprasad for service in the Livestock Division.

A special award of participation was given to Elmena Webbe.