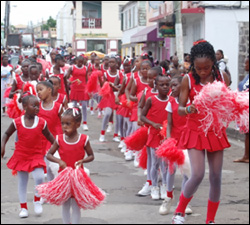 Prime Minister the Rt. Hon. Dr. Denzil L. Douglas, Leader of the political arm of the Labour Movement in the Federation of St. Kitts and Nevis showered praises on the massive turnout by residents for the annual Labour Day March through the streets of Basseterre on Monday.

“With all that we are facing, Labour has demonstrated its firm commitment to move this great country forward,” said Prime Minister Douglas.

He said that although Labour Day is a day to celebrate and salute all the workers in St. Kitts and Nevis, “it is also a day to demonstrate that Labour is mobilised for action as of today, Labour Day.”

“I call on you wherever you are in your constituencies, in your communities to get on the move and become mobilised, mobilised for action, because neither you or I know when the action is going to be called for the Labour Movement of this country,” said Dr. Douglas.

“Become mobilised, vigilant, to be steadfast and to hold on to what you have, hold on to your Labour Party. There is none that can be better than us and that is why I say, none of them, none of them, not one of them can measure up to what we have to deliver to the people of St. Kitts and Nevis,” said Prime Minister Douglas.