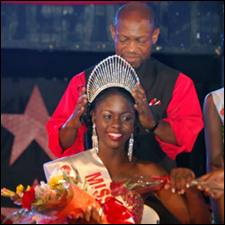 Despite raining all day a large and appreciative crowd watched the hours-long pageant under slight drizzle at times at Carnival Village in Basseterre.

Wharton accumulated 732 points, winning the title and crown as well as the Best Talent and Best Evening Wear segments.

Before assisting in presenting floral arrangements to each contestant, the 2011 Miss Labour, Zaiesha Joseph, also from St. Constituency #4 and a Verchild’s High School student, took her final walk on stage, sashed the placing contestants and her successor. Deputy Prime Minister Hon. Sam Condor presented participation trophies to the 8 teens.

Following the fanfare, the contestants in their introductory speech highlighted the contribution of Labour Leaders.

Grand Masters provided the music and there were performances by the band as well as Rock-a-Fella, who sang the popular tune, “˜Labour, Labour.’

Jamaican artiste Aidonia in a brief stage appearance had the youths rushing to the stage as he performed two seconds of his popular hit – “˜Ukku Bit.