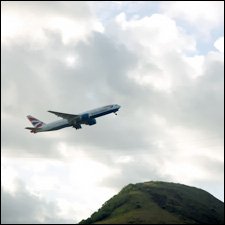 St. Kitts and Nevis Prime Minister and Minister of Tourism is in London, the British capital for the official launching of the second weekly flight to St. Kitts’ Robert L. Bradshaw International Airport. The event is part of a number of activities to observe tourism awareness month.

Although the second flight does not commence until next year, the St. Kitts and Nevis leader has been invited by the British carrier to attend today’s launching ceremony and to make brief remarks.

British Airways began its first scheduled service on January 10, 2009 and has brought more than 4,000 passengers into St. Kitts’ Robert L. Bradshaw International Airport for the first half of this year.

Minister of State in the Ministry of Tourism, Sen. the Hon. Richard Skerritt has expressed delight that British Airways has had the confidence in the future growth of tourism in St. Kitts and Nevis to bring in two new flights in just 14 months.