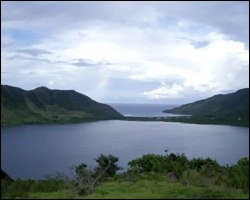 A top official of the multi-billion dollar Christophe Harbour Development has expressed confidence that despite the present market challenges, the steadfast progress on Sandy Bank Bay will provide potential homeowners and visitors, as well as local residents, with tangible evidence of the unwavering commitment to create one of the most desirable destinations in the Caribbean.

Building on the momentum gained from a successful release of homesites in October 2008, the golf course groundbreaking in November 2008, and the construction of the first home earlier this year, Christophe Harbour has now emerged as the exclusive resort community on St. Kitts’ southeastern peninsula, said Elebash.

He disclosed that in the next four to six weeks, Christophe Harbour will complete the final shaping of Sandy Bank Bay’s roadbeds.

“The soil cleared as part of this project will be used to elevate some of the neighborhood’s existing homesites. Following the site’s earth-moving and fill-in process, roadwork efforts will continue throughout the next several months. This work will include the installation of a storm-water filtration system and the grading of several low-lying areas, both of which will help protect and enhance the site’s marine- and land-based ecosystems. Final paving and landscaping of all roadways in Sandy Bank Bay and the adjacent Hillside neighborhood will be completed in summer 2010,” said Christophe Harbour in a news release.

In the coming weeks, Christophe Harbour will begin the installation of all utility requirements for Sandy Bank Bay, including the extension of water, power and communication cables that will serve the neighborhood’s future residents and guests.

Christophe Harbour will place these utility lines underground to minimize disruption from future maintenance operations and help preserve the island’s natural beauty. The utilities installation process, which will be concurrent to that of the site’s roadways construction, also is slated for completion in summer 2010.

Sandy Bank Bay is set along a dramatic horseshoe bay with two reefs and a natural sand bank more than 100 yards long. The bay will remain free of boat moorings so that sea life can flourish, and wide Atlantic views are protected.

Christophe Harbour, located on the more than 2,500-acre southeastern peninsula of St. Kitts, is planned to include a mega-yacht harbour and marina as well as an impressive collection of restaurants, shops, boutiques, five-star hotels, oceanfront and hillside homesites, villas, and a must-play Tom Fazio championship golf course.