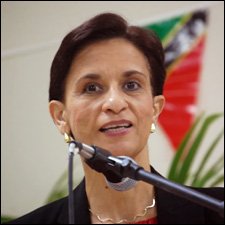 The re-election of the St. Kitts – Nevis Labour Party to an unprecedented fourth consecutive five-year term, is confidence in the handling of the economy by the Denzil L. Douglas Administration.

“The people of the Federation of St. Kitts and Nevis have given you a decisive mandate for an unprecedented fourth straight term, thereby demonstrating their confidence in your prudent and skillful management of your country’s economy, at a time when we are all challenged by the global economic malaise,” said Political Leader of the Democratic Party of St. Maarten, Hon. Sarah Westcott-Williams in a message to Prime Minister Hon. Dr. Denzil L. Douglas on his re-election victory.

Mrs. Wescott-Williams told Prime Minister Douglas that his practical response to the international, regional and local challenges “has obviously again won you the trust of the electorate in your abilities to govern with distinction. Congratulations and I wish you and the Government and people of St. Kitts and Nevis continued success.”