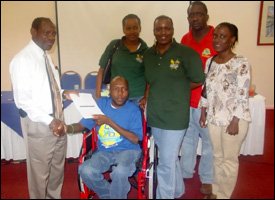 The opinions of approximately 130 young persons responding to questions such as “what would you do to help young people if you were prime minister?” were presented via report to top Government officials in St. Kitts, on Wednesday.

The handover was made at Youth Chat by CARICOM Youth Ambassador Ian Richards, who was supported by members of the research team. Youth Chat was staged at the Ocean Terrace Inn Conference Room and was organized by the Department of Youth to allow policy makers and young people to exchange ideas.

The information for the study was collected in August and September 2008, from focus group sessions held with persons between the age of 14 to 35 years, in various categories including youth in sports, young entrepreneurs, unemployed youth, secondary school students and technical/vocational students.

Janelle Lewis coordinated the local study, and gave a summary of the findings to the government officials and young people at the youth dialogue.

She noted that the discussions were fruitful and very informative and added that the focus group sessions with youths institutionalized at Her Majesty’s Prison and youths on the block proved, to be eye opening.

Ms. Lewis also reflected on insights from the study which captured a description of an ideal Caribbean youth, what concerns young people as well as career goals.

Prime Minster Douglas was familiar with the CCYD study as it was mandated by CARICOM Heads of Government, and designed to capture the dreams and aspirations of the youth, in order to inform decision making and policy planning at a national and regional level.

Reports from other member territories will be compiled into a single regional document and presented at the next meeting of CARICOM leaders. Video segments of the focus groups will also be shown to the heads of states.

Persons in St. Kitts and Nevis can peruse the document online at www.gov.kn