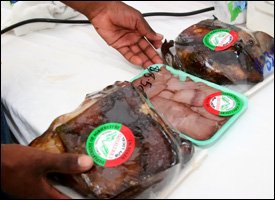 “There is money in Farming”, those were the profound words of Director of Agriculture on Nevis Mr. Keithley Amory, when he made remarks on Thursday, at  a ceremony to mark the official opening of the Department of Agriculture’s 15th Annual Open Day at the Villa in Charlestown.

The 2009 Open Day was held under the patronage of former Director of Agriculture Mr. Samuel Powell with the theme “Promoting Economic Stability through greater Agricultural and Marine Efficiency”. The two day event ends on March 27.

He disclosed that in 2008, farmers on Nevis were able to meet local demands for tomatoes, cabbage, sweet peppers and pork for one month and at present, the island was self sufficient in tomatoes  and eggplant with an abundance of carrots, onions and sweet pepper. They were also able to meet the demand for pumpkin and okra in January 2009.

“The farmers have been able to meet the local demand through our promotion of efficiency. Farmers have been encouraged to use plastic and coconut mulch for weed control; install drip irrigation systems; practice minimum tillage; practice proper crop rotation strategies; proper pruning and proper fertilization practices.

“The repayment for adhering to these practices is that based on the flow of vegetables through the Marketing Unit, EC$223,292.00 was paid to them. This is despite the fact, that they were hampered by monkeys and roaming animals. Therefore, there is money in Farming! Six new farmers have thought so and the Department has made five acres of land available for them. Sounds small but the multiplying effect is great,” he said.

Mr Amory stated that agriculture continued to play a significant role in food security and rural development on Nevis. He said though 2008 proved challenging to the Department, it continued to work diligently on the establishment of school gardens in all the primary and secondary schools to encourage the students into the field of Agriculture and to produce fresh vegetables for the School Feeding Programme.

He also pointed to the Livestock Division which continued to monitor the health of the livestock industry.  Mr. Amory said their hard work paid off and had kept prevalent diseases low and there were no new diseases.

The Vet Division’s successes the Director said had a rippling effect.

“A new initiative for the sale of smoked products resulted in an increase of 13.5 percent of products being sold,” he said.