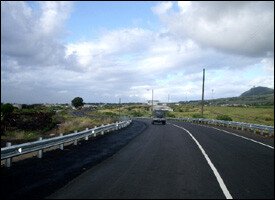 “Since 1995, our road network has been expanded and upgraded to a level that ranks among the best in the Caribbean. The new highway from the Robert L. Bradshaw International Airport to the Island Main Road west of Basseterre is only partially complete, but it is already bringing great benefits and convenience to our road users,” said Dr. Douglas.

He said it is expected that the entire West Basseterre Bypass Highway will be completed within a few months.

Dr. Douglas, a medical practitioner by profession, noted that when the St. Kitts-Nevis Labour Party took office in July 1995, the Joseph N. France General Hospital was virtually in tatters and has been rebuilt and transformed into a modern facility that stands at the centre of a progressive health service that offers state-of-the-art medical care.

“The Pogson Hospital has been rebuilt to offer modern, expanded and improved primary as well as full hospital care facilities to the residents of Sandy Point and neighbouring rural villages. Additionally this new facility will become a regional centre of excellence in the fight against HIV/AIDS. The new Pogson Medical Centre offers among other things, a 12-bed facility, 24-hour emergency medical service, an expanded pharmacy, radiology services and laboratory services. This is the model that will guide the future development of Mary Charles Hospital,” said the Prime Minister.

Dr. Douglas also boasted of his administration’s revolutionary achievements in the field education.

“Our schools have been repaired and rehabilitated and our curriculum and education management system has been significantly enhanced as part of a comprehensive Caribbean Development Bank (CDB) Basic Education Project. The old Teacher’s College has been completely rebuilt, expanded and transformed into a modern tertiary level institution offering a range of professional and academic courses including nursing education, teacher training, pre-university and university training, technical training, and hospitality services training,” he said.

Dr. Douglas also spoke about the new Saddler’s Secondary School that will not only serve the varied training and educational needs of the nation’s children, but will also provide life-long learning opportunities for the adults living in Saddlers and neighbouring communities. The school is still under construction and is to be completed in time for opening in September this year.