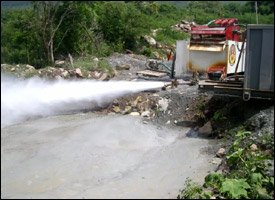 This is the view of St. Kitts and Nevis Prime Minister Hon. Dr. Denzil L. Douglas following his first visit to Hamilton Estate to see the drilling exercise being undertaken by the West Indies Power (WIP). Premier of Nevis, Hon. Joseph Parry invited Prime Minister Douglas to visit the project during his tour of areas in Nevis affected by the recent passage of Hurricane Omar.

“I am very, very impressed, very hopeful, that one of the serious challenges that we face as a people, as a nation, is the escalating high energy prices, that we may be able in the not too distant future, to provide a solution to this problem through the possibilities of geothermal energy that eventually will come to the island of Nevis and will be able to be I am sure, shared by the people of St. Kitts and Nevis generally and the people of the Caribbean islands, whom I am sure will benefit from this very important exploration that is taking place here in the Hamilton Estate area,” said Prime Minister Douglas at a post tour press conference.

Premier Parry, who accompanied Prime Minister Douglas on the tour, said that within six weeks to two months, West Indies Power will begin employment persons in relation to the production stage. He disclosed that negotiations will continue on October 29th and although the proceedings will not be open to the public “the results will be announced and reports will be made from time” to time to keep the general informed of what is happening.

Media reports confirmation by officials of West Indies Power (WIP) that at least two geothermal drill sites on Nevis have the capacity to produce hundreds of megawatts of geothermal energy.

According to McDonald, the high temperatures at Nevis 3 at Hamilton Estate, which is located at 2.5miles south of Nevis1 at Spring Hill where steam and high temperatures were also found, confirmed the existence of a continuous geothermal reservoir between the two wells.

The NIA had given WIP the authority to explore the geothermal reservoir of the island in February 2007, in its efforts to provide cheaper electricity and reduce the cost of living for Nevisians.