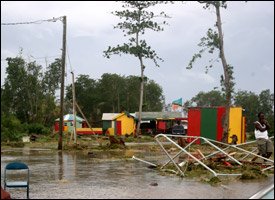 Premier of Nevis, the Hon. Joseph Parry and  Prime Minister of St. Kitts and Nevis, Hon. Dr. Denzil Douglas were part of a high level delegation  which, on Saturday, made a comprehensive tour of Nevis, to view the areas badly damaged by Hurricane Omar.

The first stop was the Oualie Beach Hotel, where one of the Sea Bridge vessels had damaged the Hotel’s pier and ran aground. The next was at Low Street in Charlestown, where the Prime Minister and his entourage got a first-hand view of the homes that were damaged by the hurricane.  Premier Parry explained to the Prime Minister that the Nevis Island Administration will be evaluating the possibility of re-housing the residents of Low Street as the area has had several flooding issues in the past.

Other stops on the tour were the Mango Bar and Restaurant and the Four Seasons Resort where the delegation was advised of the extent of damages to the property.  While the Hotel’s managers could not give a definite time for reopening, they did indicate that after the assessment is completed, a re-opening date will be announced.  Presently, the Four Seasons Resort is the only hotel closed on Nevis.  It has been reported that the other hotel properties on the island are fully operational.

Meanwhile, Premier Parry took the opportunity to have the Prime Minister and his delegation visit the Hamilton area, where steam was discovered at a third geothermal site on Thursday morning.

The tour ended at Unella’s Restaurant where members of the delegation offered brief remarks and fielded questions from the Media.