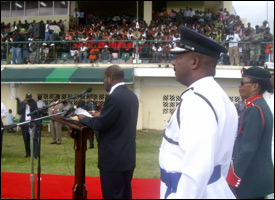 As St. Kitts and Nevis continues to celebrate 25 years as an Independent Nation, the twin-island’s Federation’s Prime Minister says the future will demand “vision and determination, self-awareness and self-mastery, courage, conviction, competence and compassion.”

“Nothing less will do,” declared Prime Minister Douglas as he delivered the Silver Anniversary Independence Message to thousands of nationals including visiting dignitaries attending the traditional Ceremonial Parade at the Football Stadium at Warner Park.

The St. Kitts and Nevis leader pointed out that at this stage of the Federation’s development, “we must now ““ all of us ““ place as much emphasis on developing our intangible assets as we have been on developing our very important, tangible assets ““ our physical infrastructure. We must do so because it is the powerful intangible assets like discipline and determination; initiative and perseverance; fair play and integrity; respect for self, and for others, that determine the fate of a nation. It is these powerful intangibles that determine which societies realize their potential ““ which people truly become masters of their own destiny.”

“Almost seventy years ago, Maslow noted that human beings in all cultures concern themselves, first and foremost, with survival; with physical safety; with their material well-being. He further noted that once these needs have been met generally however, we begin to have higher order needs ““ the need for community; the need to have one’s skills, competencies, and character recognized; the need to be thought of highly by one’s fellow man. These are the needs of psychologically healthy individuals, and these are the needs of psychologically healthy nations,” said Prime Minister Douglas, adding:

“And this is where St. Kitts and Nevis now stands. We are at that point in our history where focusing only on physical, material, economic advances will not do. We must now also stress and develop the powerful intangibles that define a people as well. And so, we must, now, like all responsible peoples, begin to look inward to assess not only who we are as a people, but who and what we want to be – AND what it will take for us to get there.”

Pointing to the nation’s success at building schools across the length and breadth of the Federation, Prime Minister Douglas declared that it was time to promote the intangible assets of dedication and discipline ““ on the part of parents, teachers, and students ““ to stimulate innovative young minds so they will be equipped to seize the new opportunities being created by the evolving and expanding economy.

“We have been very successful at establishing hospitals and health centers throughout St. Kitts and Nevis, to serve as oases of preventive and curative care. Together we must now promote the intangible asset of adults becoming very, very serious about shaping young people’s characters so as to prevent our health care facilities ““ and communities throughout the Federation – from becoming embroiled in youth-based conflict, hostility, and rage. We have been very successful at distributing hundreds of acres of land to the Federation’s farmers. Together we must now promote the intangible assets of self-knowledge and self-awareness that will cause our people to avoid hypertension, diabetes, and other deadly diseases by choosing healthy, natural, life-preserving local foods over attractively packaged, but chemically-laden, unhealthy imports,” said Prime Minister Douglas.

Further pointing to the establishment of important educational facilities like the Clarence Fitzroy Bryant College and the Information Technology Center, Prime Minister Douglas called for the promotion of the intangible assets of vision and initiation “so that our people will continue to gravitate toward these facilities, keenly aware that these institutions were established to ensure that the people of St. Kitts and Nevis will be equipped to compete with anyone ““ whether as employees or as entrepreneurs – in the Federation’s progressive post-sugar, services economy.”

Prime Minister Douglas said the twin-island Federation has done well over the 25 years, “so well that our students in creating the theme for our Independence celebrations have described the periods thus: “Pride, Development, Progress, 25 years of Success.”

He further noted that the United Nations attests that the quality of life in St. Kitts and Nevis is far superior to that in the vast majority of countries in the world today.

“Our macro-economic indicators have advanced us to the classification of a middle-income country. Indeed, judged by the United Nations Development Index, we are the leading nation in the Eastern Caribbean Sub-region we rank among the top third of all nations in the world,” said Prime Minister Douglas.