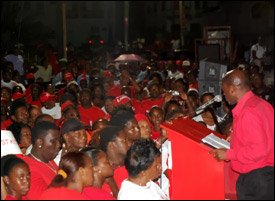 St. Kitts and Nevis Prime Minister Hon. Dr. Denzil L. Douglas said Sunday that Parliamentary approval of the realignment of the boundaries as recommended by the Constituency Boundaries Commission is in line with the 1983 Constitution of the twin-island Federation.

Giving a historical review of the realignment of the boundaries at a Public Meeting in Cunningham Village, Cayon on Sunday night, Prime Minister Douglas noted that the realignment is in keeping with the Constitution of the Federation of St. Kitts and Nevis which calls for a review from time to time.

Dr. Douglas told the over 3,000 persons present that although seven of the eight constituencies have been affected by the realignment, persons voting in new constituencies will continue to vote at the very same places they voted in 2004.

“The National Assembly had to realign the boundaries because the Government gave a commitment following the 2004 General Election,” said Dr. Douglas.

He pointed to the Report of the Commonwealth Observer Assessment Mission headed by then Leader of the Opposition in the Barbados House of Assembly and now Prime Minister of Barbados, Hon. David Thompson and included Director of Elections in Jamaica, Mr. Granville Walker; recommended “a need for a comprehensive review of constituent boundaries by the Electoral and Boundaries Commission to reflect balance and fairness of electors.”

Prime Minister Douglas said that the commitment to Electoral Reform was also outlined by the Governor General His Excellency Dr. Sir Cuthbert Sebastian in the Speech from Throne at the Opening of a new Session of the National Assembly in December 2004.

“He (Governor General) said that the work of the Parliament for the next five years will see electoral reform including the realignment of the boundaries so as to make the constituencies near equal as possible according to the Constitution. All that my Government has done was to put in place the necessary machinery to ensure that the Commonwealth Observer Mission advice and their blueprint for electoral reform were followed,” said Dr. Douglas.

He said the National Assembly last Thursday debated the Report from the Constituencies Boundaries Commission and following the debate relevant documents were sent to the Governor General for his assent and to the Government Printery for gazetting.

Prime Minister Douglas gave the assurance that the upcoming General Elections has been planned and is being executed by the relevant authorities to the letter and in accordance with the Constitution of St. Kitts and Nevis.

He accused the opposition People’s Action Movement (PAM), which has one seat in the 11-member lawmaking body of indicating over a year ago that it was ready for the elections any time it is called.

“If they are ready, why run to the courts?” asked Prime Minister Douglas, who added that the 2009 elections has been planned to showcase the reasons why his governing St. Kitts-Nevis Labour Party will be re-elected.

“We will be re-elected because of my Government’s delivery in working hard for the people of St. Kitts and Nevis. Look at what we have done compared with PAM. Look at the areas of social development. Look at the revolution in housing, land ownership, healthcare, education, agriculture and tourism,” said Dr. Douglas.