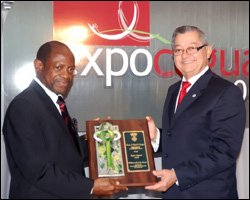 The Puerto Rican Municipality of Caguas Wednesday night recognised St. Kitts and Nevis Prime Minister Hon. Dr. Denzil L. Douglas for his “services, values and extraordinary efforts and initiatives” that have placed him “in the contemporary history of our Caribbean region in the fields of public service, medicine, civil society and politics.”


Prime Minister Douglas “has been a key figure in the St. Kitts-Nevis Labour Party and a public servant in your nation, but the integration efforts in the Eastern Caribbean Region have found in you a key ally and supporter,” said Acting Mayor of Caguas, the Hon. Wilfredo Puig as he symbolically presented the Keys to the City.

The Acting Mayor told Prime Minister Douglas at a dinner in his honour in the presence of the cream of the Caguas business community that he has been a “tenacious fighter in the defence of the regional interests in all the international and global forums you have had the opportunity to speak.”

Acting Mayor Puig said that presentation of the key to the city over the centuries has been a symbol of authority, governance and sovereignty.

“It has been given to honorary visitors as an expression of friendship, distinction, hospitality and trust,” said the Acting Mayor who said he was making the presentation on behalf of Mayor, the Hon. William Miranda Marin “as a symbol of our friendship, respect and trust for your work and important role for the whole Caribbean Region.”

He said the key should be regarded as a symbol of the opening of the heart and will of all Puerto Rican nationals and of the economy to welcome the citizens of the different Eastern Caribbean States to Puerto Rico.

He said that the presentation of the key to Prime Minister Douglas is also a “commitment in the process of building a stronger and more democratic Caribbean region in which all of our citizens have more and better opportunities to develop and succeed.”

The Acting Mayor in presenting the key to Prime Minister Douglas, who is also the current Chairman of the OECS Authority, said the key is a symbol of the “strong historical and cultural ties that brig our nations together and a “new era in the relationship between the Eastern Caribbean and Puerto Rico.”