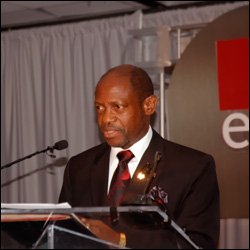 Addressing the` cream if the Caguas business community at a dinner in his honour Wednesday night at the Performing Arts Center,  Prime Minister Douglas said the participation of the OECS in ExpoCaguas 2009, represents new efforts to develop practical and mutual relations between Puerto Rico and the Eastern Caribbean countries.

“I believe that in the short to medium terms such relations would facilitate enhanced trade, tourism and general business between our countries. Such has important implications for the further strengthening of the Caribbean, and specifically for Puerto Rico and the Eastern Caribbean states. ExpoCaguas 2009 can be perceived as the latest spark in the new building processes between us. Moreover, it gives reality to earlier and significant initiatives that were undertaken between Puerto Rico and the OECS including the establishment in 2006 of an OECS Office with consular attributes, here in Puerto Rico,” said Prime Minister Douglas, who earlier in the day attended the opening ceremony and visited the booths including several from St. Kitts and Nevis and OECS states.

Dr. Douglas, who is also the current Chairman of the OECS Authority, said Caguas and its many industries and services are an ideal point of contact for Eastern Caribbean business interests.

“It is potentially a point of contact for the mutual cooperation and exploration of a wide array of products, services, tourism and investment. Through events as ExpoCaguas, and other initiatives, we can safely say that we have begun a process that can only lead to the further improvement in the quality of life for people in our various countries. Our Caribbean islands have had a common historical background that was anchored in agricultural commodities such as sugar, bananas, coffee, cotton, tobacco and rum. Our trading relations in the late 20th Century reflected those bonds between the Caribbean, Europe and the United States,” he said.

He noted that the traditional economic ties today are being broken in an environment of trade liberalization and globalization. and small island economies, is both a potential benefit as well as a real challenge.

Prime Minister Douglas is of the view that the Caribbean can no longer afford to be inward looking but must solidly become an effective player on the global stage by maximizing advantages and effectively presenting them to the world.