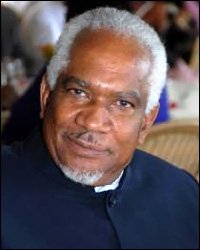 St. Kitts and Nevis Prime Minister Hon. Dr. Denzil L. Douglas has expressed “great sadness” at the recent passing of former Ambassador of St. Kitts and Nevis at the Eastern Caribbean States Embassies in Brussels and OECS High Commissioner to Canada, His Excellency George R. E. Bullen who died in Barbados on 27th March, 2009.  He succumbed to his fight against cancer.

“The region has lost a true diplomatic giant whose passion for his people was evident in the zeal with which he pursued his ambassadorial duties and the many achievements realised,” said Prime Minister Douglas in a message to the Prime Minister of Grenada, Mr. Tillman Thomas.

“During his tenure Mr. Bullen represented the ECS with quiet determination where he excelled in the areas of trade negotiation and tourism promotion.  Mr. Bullen was held in high esteem by all who had the privilege to call him colleague and this is a true testament to the measure of a man he was,” Dr. Douglas said.

Prime Minister Douglas said it was an honour to have witnessed Ambassador Bullen’s commitment to service and will always appreciate his dedication.

Dr. Douglas in joining the Government and People of Grenada in mourning “a great man” requested best wishes and deepest sympathies to the family and colleagues of Ambassador Bullen.