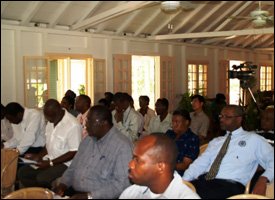 “Nevis is strides closer to building an industry deep in the linkage between agriculture and tourism; and this is evident in the Nevis Module, which has been recognized and/or duplicated by countries world wide,” said Premier of Nevis, the Hon. Joseph Parry, in his brief remarks at a consultation on Monday, March 30, 2009 at the Old Manor Hotel.

The consultation exercise, an initiative of the Organization of American States (OAS) and the Inter-American Institute for Cooperation on Agriculture (IICA), was convened under the OAS-funded project which links Tourism and Agriculture.

“Tourism and Agriculture linkages must be firmly established,” reiterated the Premier. He reminded the audience that the Nevis Module was conceived when a few hotels on Nevis expressed their willingness to buy locally grown food once they were assured that the produce would be readily available.  “The Department of Agriculture was able to rise to the challenge; and that set the pace for the rest of the region,” he said.

Meanwhile, similar consultation exercises have been implemented by IICA in seven countries around the region, namely– Barbados, Dominica, Guyana, Jamaica, Suriname, Trinidad and Tobago and St Kitts and Nevis. The overall objective of the project is to promote increased linkages between tourism and agriculture that will create economic opportunities, build resilience in rural communities and enhance the sustainable development of both the tourism and agriculture industries.

Mr. Augustine Merchant, country representative for IICA, coordinated the meeting and stated that he will continue to strengthen the organization’s contributions through the agro-tourism program.

Mr. Starret Greene, Director and OAS representative in St. Kitts and Nevis, expressed his Organization’s satisfaction with the work done under the project and welcomed the opportunity for stakeholders to develop ideas on the way forward.

In re-emphasizing the importance of agriculture to our island, the Premier called on the young people to develop an interest in becoming farmers.  He stated that farming no longer has a negative stigma to it; and that through this one can be assured of lucrative self-employment. “We need to demonstrate to the younger generation the positive aspects of farming by going to the schools, the community and by marketing farming in a way that it becomes a positive choice.”

He continued by stating that there is also a need to employ greater use of technology and scientific methods which can arouse curiosity in young people and stimulate their interest in the subject. “If we can achieve all of this we would achieve much,” he concluded.

In attendance at the workshop were many other persons from private and public entities involved or interested in agro-tourism ventures in Nevis.  From all reports, they, too, would have gained valuable insight from the experience.