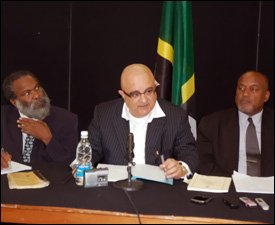 Attorney Anthony Astaphan S.C. at a news conference in the Parliamentary Lounge on Wednesday afternoon leveled charges of “constitutional heresy” and a “complete misrepresentation of the law” against the Political Leader of the opposition People’s Action Movement in St. Kitts, Mr. Lindsay Grant for misleading statements that the mandate of the Denzil Douglas Labour Government expired on the fifth anniversary of the October 24th general election.

He read Section 47. – (1) of the St. Kitts and Nevis Constitution which states: The Governor-General may at any time prorogue or dissolve Parliament. (2) Subject to subsection (3), Parliament, unless sooner dissolved, shall continue for five years from the date of the first sitting of the National Assembly after any dissolution and shall then stand dissolved.

“The life of the Parliament begins from the first day of the sitting of the National Assembly after the previous dissolution for the elections. It is my understanding that elections were in October 2004 and the First Sitting of the House was in December 2004 and therefore the life of the Parliament continues unfettered and the mandate of the government until the dissolution of the parliament,” said the senior counsel.

Mr. Astaphan also made reference to Sub-section 5 which states: If, after a dissolution of Parliament and before the holding of the general election of Representatives, the Prime Minister advises the Governor-General that, because of some matter of urgent national importance, it is necessary to recall Parliament, the Governor-General shall summon the Parliament that has been dissolved to meet, but the general election of Representatives shall proceed and the Parliament that has been recalled shall, if not sooner dissolved, again stand dissolved on the date appointed for the nomination of candidates in that general election.

“It means that even after the Parliament has been dissolved, the Prime Minister and his Government continues in office and in the exercise of his executive powers, the Prime Minister can advise the Governor General to convene a sitting of the House for a matter of urgency,” said Mr. Astaphan, who pointed to a similar development in Antigua and Barbuda where Prime Minister Hon. Baldwin Spencer reconvened Parliament after it was dissolved to deal with the acquisition of lands belonging to Sir Allan Stanford and his related companies.

Mr. Astaphan said it would not be the first time in the history of Caribbean politics and the Commonwealth politics for a government to continue in office after the dissolution of Parliament and prior to general elections.

“Full support is given to this position by the clear language of the Constitution in Section 48 (1) which states ““ “˜A general election of members of the National Assembly shall be held at such time within ninety days after any dissolution of Parliament as the Governor-General may appoint’,” said Mr. Astaphan.

“So you cannot have a mandate expiring or elapsing or a change of government or elections until the Prime Minister, who continues in office after the dissolution of the Parliament decides to advise the Governor General and announce a date for a general election,” Mr. Astaphan.