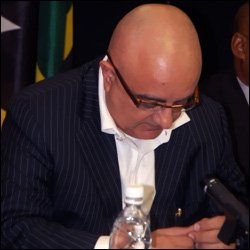 There is no order by the High Court that the upcoming general election must be held on the present boundaries.

This was reiterated by Senior Counsel and Head of the Government’s Legal Team, Mr. Anthony Astaphan, who during a Press Conference on Wednesday said the Judge also dismissed all allegations of bias and bad faith leveled by the People’s Action Movement at the Chairman and other members of the Constituency Boundaries Commission.

He was at the time clarifying statements made by the Political Leader of the People’s Action Movement (PAM), Mr. Lindsay Grant and members of his party that His Lordship, Mr. Justice Errol Thomas’ judgment had ordered that the election must be held on the present boundaries.

“No such Order was made. Absolutely no such order was made. The Judge made no order that elections must be held on the present boundaries. Indeed there is nothing in the judgment of the Judge that precludes, prevents, hinders, frustrates or qualifies the obligation of the Constituency Boundaries Commission to continue with its mandate,” said Mr. Astaphan.

He pointed out that this was one of the primary or major complaints of the People’s Action Movement during the recent trial that the Constituency Boundaries Commission was not exercising its mandate.

He noted that part of the complaint of the People’s Action Movement in the judgment delivered by Mr. Justice Errol Thomas, were allegations of bias and bad faith and improper motives, corruption and undue influence and all sorts of insidious political allegations were made.

“It is clear to all who read the judgment that the Judge throughout his ruling dismissed all such allegations and there was not a single finding of fact against the integrity and character of the Chairman (Lawyer Anthony Astaphan),” said Mr. Astaphan, who was flanked by other members of the legal team, Dr. Henry Browne, Mr. Sylvester Anthony and Dr. Kenny Anthony.

“What the Judge said was that the SRO was without lawful authority and that the Constituency Boundaries Commission ought not to have relied on the Report from the Boundaries Technical Committee established under the SRO,” Astaphan told the media.