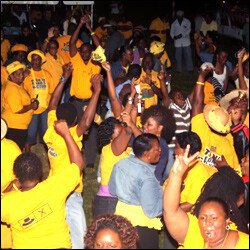 PAM Supporters Were Not Swayed By Dirty Trick

The St.Kitts-Nevis Opposition Party the  People’s Action Movement’s PAM’s public meeting on Sunday 10th January in the town of Sandy Point may very well go down as one of the pivotal moments in the political campaign leading up to the January 25th General Elections.

Thousands of supporters journeyed to the traditional stronghold of the party to stage the party’s third major meeting since the ringing of the bell on Thursday evening  . The village of Mt. Idle was a sea of gold/yellow as a joyous and jubilant mass of PAM supporters showed their exuberance and enthusiasm as the country draws closer to what political observers have described as potentially the most historic elections in the country;s history.

Speaker after speaker pounded issue after issue including crime, cost of living and corruption. Political Leader Lindsay Grant highlighted one of his new PAM administrations top priority and that is the lowering of the cost of living through the waiving of all import duties and consumption taxes on imported foodstuff. The announcement was once again met with much jubilance by the massive crowd. The Political Leader also outlined PAM’s plans to enhance the crime fighting ability of the police force which will in turn result in a lowering of the number of murders and violent crimes in the country.

Grant also  revealed a plot by the ruling labour party to entrap him in what seemed to be a sinister scheme to try and dirty his name.

However the highlight of the evening was during the presentation of the final speaker  the Hon.Shawn K. Richards. During Richards presentation the Prime Minister Dr. Denzil Douglas and his security detail which included a caravan of about 4-5 vehicles and at least 7-10 security personnel approached the massive crowd  which had spilled onto the Island main road. Rather than driving around the meeting by diverting through a side street as every vehicle before him had done the Prime Minister’s caravan attempted to drive through the massive crowd.  The Labour Leader’s caravan motioned towards the crowd however supporters angered by the Prime Minister’s arrogance and insistence on driving through what was an impassable sea of people stood their ground . The caravan came to a stand still for at least 10 minutes before they finally decided to divert and take another route around the meeting. An obviously angry Prime Minister Douglas along with his 5-6 car caravan drove up a narrow side street and the meeting continued without further incident.

“Who does Douglas think he is,” said PAM MP Shawn K. Richards. “Every vehicle that has come has had to drive around because it is obvious that with all these people there is no way vehicles can pass through. I think Douglas’ attempt to drive thru the meeting was a calculated move to try and disrupt the meeting and basically test the resolve of the PAM supporters,” Richards continued. “Well he certainly got his answer and he got it loud and clear and the answer is that this election PAM will not lay down role over and play dead. PAM will not be walked on, walked over or pushed down or pushed over. If it’s one election we will not allow labour to intimidate and walk all over  us its this one the Constituency #5 representative implored.

The Prime Minister was obviously not pleased with the incident as the resentment towards him was palpable and overwhelming as angry and sometimes over zealous supporters openly and animatedly showed their disgust with him and his attempt to disrupt the meeting.

Political observers described the meeting as easily the largest and definitely the most eventful thus far for the election season of any political party.