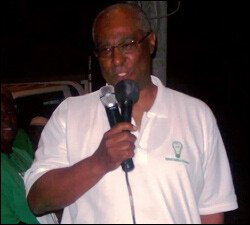 The Hon. Joseph Parry, Premier of Nevis and leader of the Nevis Reformation Party said his party is ready for the upcoming election and they are running on their performance record.  He made the statement recently to Caribbean Media Corporation (CMC) news anchor, Ms. Kaymar Jordan via telephone from his Bath Hotel office.

“My NRP led government has enhanced the roads and improved the amount of water on the island, we have also worked to diversify the economy.  Even with the closure of Four Seasons Resort, we continue to train the young people here in Nevis and improve the health care sector on the island,” he said.

The upcoming St. Kitts-Nevis Federal election is slated for January 25th, 2010 and according to the Premier, the business of the election had been dragging out for sometime but with that behind, he and his team will campaign hard with public meetings every night until the day before the election.

During the interview, Premier Parry informed Ms. Jordan that in addition to this Federal election, Nevis will have a local election, which is due in 2011.

The Nevis Reformation Party will be vying for three seats in the Federal House.  The NRP candidates nominated for election will be present parliamentarian, the Hon. Patrice Nisbett of St. James /St. Thomas, Hon. Hensley Daniel working towards the St. John’s/St. Paul’s seat and Mrs. Patsy Hanley who will be fighting for the seat in St. George’s.

At the close of the interview, Premier Parry remarked that the NRP was constantly performing for the people of Nevis.  “We hope to get all three seats based on the work, creativity of programmes and progress of projects developed by this Nevis Reformation Party-led government.  I guarantee that the efforts and successes of the NRP will take Nevis to greater heights.”